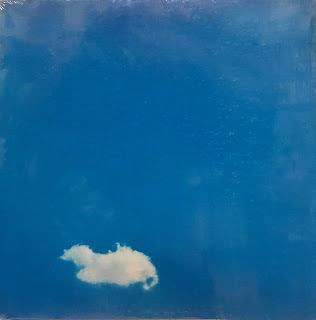 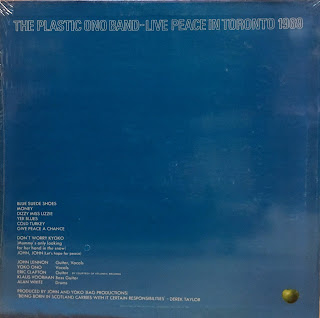 Live Peace in Toronto 1969
The Plastic Ono Band
Apple Records SW-3362
1969
My longtime hero, John Lennon, would have turned 80 yesterday if he had not been murdered 40 years ago.  I find that staggering and a little depressing as well.  I like to imagine what he might be like if he were still with us.  I hope he would still be making music, but I'm pretty sure it would not sound anything like this record which I think is unquestionably the hardest rocking album he released outside of the Beatles and that includes his album actually titled "Rock 'N' Roll."  The album was recorded under chaotic circumstances at a rock festival in Toronto by an ad hoc band with little rehearsal time.  The record begins with Lennon announcing that they are only going to play songs they know because they have never played together before.  It gets off to a roaring start with Carl Perkins' "Blue Suede Shoes" which features a sizzling guitar solo from Eric Clapton.  I enjoy Lennon's enthusiastic vocal.  It is followed by an extremely heavy version of "Money."  I like the power of the new version but the vocal is much weaker than the version Lennon sang with the Beatles.  Lennon does better with "Dizzy Miss Lizzie" which is also heavier that the Beatles version but retains the intensity and charisma of that version.  The band tackles an original Beatles song with "Yer Blues" off of the "White Album."  Lennon and Clapton had performed the song together previously on the Rolling Stones' television show "Rock and Roll Circus."  The arrangement is similar to the Beatles' version although the song does benefit from the heaviness of the Plastic Ono Band sound and Clapton offers up another smoking guitar solo.  The next song is Lennon's solo single "Cold Turkey" which had yet to be released at the time of the concert.  Yoko Ono makes her presence felt with banshee wails and bleats in the background.  I prefer the studio version, this sounds a little sloppy which is hardly surprising since Lennon says they have never performed it before.  Side one concludes with a lumbering version of  Lennon's first solo single "Give Peace a Chance."  It is messy and Lennon apparently couldn't remember the words to the verses but it gets the job done.  Side two features Yoko doing "her thing all over you" as Lennon puts it.  Like many Beatlemaniacs I loathed Ono's music when I was younger and almost never played side two of this record.  I grew to like her music however as I got older and now play the second side as well.  The opening track "Don't Worry Kyoko" is my favorite Ono song although I prefer the studio version.  Ono howls away over a plodding riff from the band that I think ought to be taken at a little faster tempo.  I still find it compelling though, especially compared to the next song "John, John (Let's Hope For Peace)" which had been introduced in the "Amsterdam" segment of John and Yoko's "Wedding Album."  It features Ono running through her throat shredding bag of tricks over drones of guitar feedback.  If I am not in the right mood it sounds interminable and torturous and even if I am in the right mood it can be kind of grueling but it offers an inspired performance from Ono that impresses me.  She and the band exit the stage but leave their instruments on emitting a prolonged cycle of ringing feedback to conclude the song.  This is definitely a young man's album - loud, heavy, confrontational and experimental.  It is hard to believe that the same two artists were responsible for the cozy domestic bliss of "Double Fantasy" a mere 11 years later.  I assume that if Lennon were still around making music it would be a lot more like "Double Fantasy" than this which would be fine, I'd be thrilled to have any kind of music from him.  But this album represents many of the qualities I most admire in Lennon including his fearlessness, his honesty, his brashness and his sincerity.  Listening to it 80 years after his birth I'm reminded of how much I miss him and how much he has meant to me throughout my life.  Recommended to Kabuki theater fans who dig rock and roll.
Posted by Zot at 6:33 PM