Jim Brown Tells It Like It Is! - Jim Brown 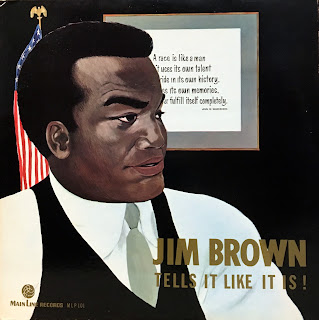 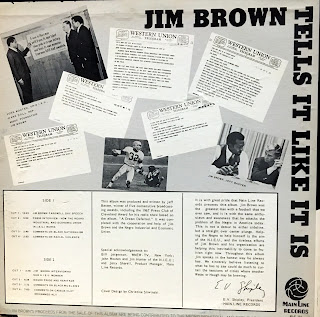 Jim Brown Tells It Like It Is!
Jim Brown
Main Line Records MLP 101
1967
I bought this at a garage sale in West Hollywood for fifty cents about thirty years ago.  I bought it out of curiosity, gave it a single spin and then eventually it ended up on my purgatory shelf of records I'm thinking of discarding.  I pulled it out this summer and gave it another spin in the wake of the turmoil and racial activism that was sweeping the country.  I was impressed and also depressed that it still sounds relevant today.  The record was made to benefit the Negro Industrial and Economic Union (later renamed the Black Economic Union) which Brown founded.  The record consists of recordings of Brown's speeches as well as interviews with journalist Bill Jorgensen who also acts as a narrator for the record.  The record opens with some football highlights featuring Brown and recordings of civil rights activism before segueing into his speech at Jim Brown Farewell Day at Cleveland Municipal Stadium upon retiring from the National Football League.  The speech excerpt contains no reference to football but rather is devoted to racial equality and Brown's beliefs regarding the proper approach to it which involves economic betterment and earning respect.  This is followed by Brown explaining his program to Jorgensen in an interview which involves getting black Americans and supportive whites to join his union and providing the members with education, training and financial support through loans.  Brown believes economic self-sufficiency will lead to greater racial equality and social integration.  Jorgensen next interviews Brown about black nationalism.  Brown expresses respect but also distances himself from them because of their lack of organization and their attempts to separate from mainstream society.  Brown also makes some general comments about racism and how it deprives black males of their ability to be a "man."  The side concludes with some comments about racial violence.  He states that the violence is one-sided, that blacks are always on the receiving end of the violence.  He also criticizes riots as being unconstructive and a senseless destruction of property.  At the end of side one Jorgensen calls Brown a revolutionary and endorses his approach of equality through economic achievement.  Side two opens with Brown interviewing a new member of his union in his office.  He talks about the membership process.  Next Brown discusses the benefits of his union for young people and black businessmen.  This is followed by Brown talking about the people who have helped him in his life noting that some of them were white.  He argues that although racism is prevalent in American society, that there are sympathetic white people who can help the movement.  The next track is about black pride.  He approves of the expression of pride in their African heritage by young blacks.  He talks about his use of the term "negro" instead of "black" or "Afro-American" (which he does throughout the record) which I don't understand.  He doesn't justify it, just notes that you can get away with it if you don't act like an "Uncle Tom."  He again addresses black nationalism which he associates with young people on the West Coast.  He is sympathetic but rejects economic separatism considering it an impossibility.  He next speaks about black Muslims whose popularity he attributes to racism.  He believes they would be irrelevant if there was racial equality.  This leads into a discussion about Muhammad Ali whose defiant position he attributes to the historical emasculation of the black man.  I'm not sure why he feels a need to defend Ali or why he chooses such a convoluted defense.  He doesn't agree with Ali but he does not oppose him either.  He positions himself somewhere in between Ali and Martin Luther King Jr. who he also does not agree with.  The record concludes with Jorgensen outlining and defending Brown's positions presumably addressing white listeners which is reinforced by a clip of John F. Kennedy asking white people to try to relate to black Americans' frustration and impatience with racial inequality.  I suspect that white people are the principle target of this record.  It is so defensive and wary about being offensive that I think some black listeners of the time would have found it condescending or wishy-washy.  It is also extremely male-centric.  Brown's perspective is defined by a macho interpretation of masculinity.  He rarely has anything to say about black women.  He even complains about black men's authority being usurped by black women in their homes, not allowing them to be the "pillar of strength" in their families.  Given the prominence of women in the Black Lives Matter movement and the current civil rights struggle, this is the most dated aspect of the album along with Brown's insistence on using the term "negro."  Brown's entire ethos revolves around a man being a man.  This is clearly his problem with Dr. King's movement, the idea of being passive and non-violent in the face of aggression is an anathema to him - hardly surprising when you consider the style of football he played.  I think it is also at the core of his economic position.  A man should not take hand outs or complain about others, he should earn his own way in order to gain respect.  Fifty years later Brown's economic solution still makes sense to me.  It is why I find this record relevant.  I wish it was more of a historical artifact, but most of the problems that Brown talks about are still around today.  It is an interesting record and Brown is an engaging speaker, so I moved it off the purgatory shelf and back into my collection.  That said, I would only recommend it to black Republicans and misogynist liberals.
Posted by Zot at 7:01 PM