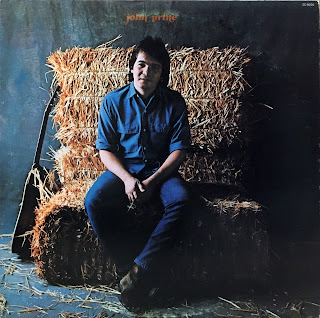 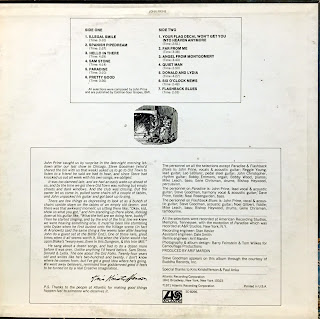 John Prine
John Prine
Atlantic SD 8296
1971
As Covid-19 rages unchecked through the country, I feel fortunate that no one close to me has come down with it or succumbed to it.  For me the Covid gut check came back in April when I heard that John Prine died from it.  It really brought home to me the danger of the virus.  I've admired Prine for many years although I have to admit that when I first heard him back in the 1970s as a teenager I was turned off by his homespun voice.  Eventually as I developed a taste for country and folk music, I came to appreciate his grit and authenticity.  This is my favorite of his albums.  It was his debut album and it is stunningly impressive, one of the great debut albums of that era.  It is loaded with classic songs that reveal Prine's sensitivity and insight into the lives of ordinary people.  Americana doesn't get any better than this.  The album opens with the catchy "Illegal Smile" which I always thought was a drug song although Prine claimed it was more about mental escapism.  I think it works either way.  I assume the reference to being in court with a judge named Hoffman is a reference to the biased judge who presided over the trial of the Chicago 7.  "Spanish Pipedream" is another escapist song with humorous lyrics set to a perky country melody.  "Hello In There" is one of Prine's best songs.  It is a poignant description of an old man's loneliness supported by a very lovely tune.  I think "Sam Stone" is Prine's greatest song.  It is an incredibly bleak and tragic tale of the downward spiral of a drug-addicted veteran.  It is so depressing I would find it unbearable were it not for the brilliance of Prine's unforgettable words.  Even though Prine delivers it in a matter-of-fact laconic style the song is absolutely riveting.  "Paradise" sounds like an old country classic particularly with Prine's brother Dave driving it with his fiddle.  You can easily imagine the Carter Family covering it and I am partial to the covers of it by Jackie DeShannon and the Everly Brothers, but Prine does sing it with more feeling than is typical with him probably because it was a highly personal song for him.  It is about the Kentucky town his parents were born in being ravaged by coal company strip mining.  The side concludes with "Pretty Good" which is about as close as Prine comes to rocking out on the album.  It is slow but noisy and punchy with loud electric guitar and organ runs.  It reminds me of Bob Dylan with the Band or Neil Young when he is leaning country.  That is even true of the lyrics which are slightly surreal and tongue in cheek.  Side two opens with "Your Flag Decal Won't Get You Into Heaven Anymore" which features humorous and understated criticism of supporters of the Vietnam War.  "Far From Me" is a mournful country song about a disintegrating relationship driven by Leo LeBlanc's sorrowful steel guitar lines.  "Angel From Montgomery" vividly describes the unhappiness of a disillusioned middle-aged woman.  My favorite version of this much-covered song is Bonnie Raitt's performance on "Streetlights" but Prine's version is very affecting, particularly Bobby Emmons melancholy organ accompaniment.  "Quiet Man" is more vague than most of the songs on the album, but it makes up for its lack of focus with a forceful rock sound that reminds me of the Band.  "Donald and Lydia" depicts the love affair between an overweight country girl and a young soldier who though separated in their real lives, meet in their dreams to make love.  It is a beautiful song that shows Prine's gift for evocative language.  "Six O'Clock News" is a grim song about a troubled young man who kills himself.  According to Prine the youth kills himself when he finds out that he was born because of an incestuous relationship between his mother and grandfather.  The song is enigmatic enough that I did not realize this from the lyrics, but listening to it after learning about it I can perceive the clues that indicate this.  The album concludes with "Flashback Blues" which is a jaunty upbeat tune with a western swing sound courtesy of Noel Gilbert's fiddle playing.  In contrast to the cheerful music the lyrics look back on a hard-living past with poetic imagery.  If this had been the only record Prine ever recorded he would still have to be considered one of the greatest songwriters in rock.  His gift for generating powerful emotions with understated evocative lyrics is almost unparalleled and as a rock wordsmith he ranks with the best American songwriters like Dylan, Randy Newman, John Fogerty, Bruce Springsteen and Dolly Parton.  No song on this album is less than good, many are great and four of them, "Hello In There," "Sam Stone," "Paradise" and "Angel From Montgomery," are immortal classics.  To my mind that makes this album a masterpiece that everyone ought to own.  John Prine was an American treasure and I greatly mourn his passing.  Recommended to Springsteen fans whose favorite album is "Nebraska."
Posted by Zot at 3:57 PM